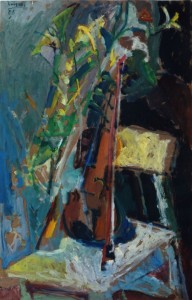 I believe the most interesting and striking element of old time fiddling is bowing. It is in this aspect of fiddle playing that the diversity, richness, and playful spirit of the tradition are compressed into. Bowing was the first thing that caught my attention the first time I discovered old time fiddling. I would like to discuss two aspects of old time bowing. First, it is the diversity and character of bow grips. Old time fiddlers very often develop bow grips that are insulting to the average classical grip. However, I believe they very often have valid reasons for adopting these bow holds. As open minded musicians, we should make an effort to understand these habits before we rush into condemning them. Like many musicians around the world many fiddlers have managed to come up with personalized ways of playing their instruments, achieving however a high level of playability, skill and musicianship. Second, it is what I think of as the overall mentality of old time bowing. I had stopped playing for a few years before I met self-taught old time fiddler Lucas Paisley from North Carolina. I was amazed at the overall kinesthetic quality of his bowing. His bowing mentality involved minimum amount of ‘technique’ but tons of musicianship and effortless groove. Lucas really encouraged me to start playing again. Many old time fiddlers offer a great example of musicians who learn how to play music in a purely organic way by developing their performing attitude and skills as an integral part of the actual playing experience without approaching them as a ‘requirement’.

I am not a relativist when it comes to bow grip. I believe there are bad bow grips by definition. Beginners should be encouraged to get used to the classical bow hold or any of its legitimate variations. Given the mechanics of the modern bow construction, the classical bow hold is the way to go if we want to be able to produce a wide range of sounds. It all boils down to what we want to achieve. If we know what we want, then there are more or less effective ways of achieving the goals we’ve set. For example, if we wish to incorporate the rhythm chop into our playing, then holding the bow away from the frog is not really helpful, because we won’t be able get that nice bite we needed for a good rhythm chop. However, we often see old time fiddlers holding the bow away from frog. Why? Because they obviously feel they don’t need the full length of their bow. Many fiddlers are unconsciously aware of that and tend to hold their modern bows away from the frog thus shortening it somehow. If we look back in time we will see that it was the musical needs of each given time that dictated the advancements in instrument and bow construction. For example, bows during the Baroque period were shorter. Longer bows were developed to facilitate the need for playing longer notes like in singing. The same applies to posture and kinesthetics. 19th century violinists were generally playing with a lowered elbow and as a natural consequence their wrist was bent. Today however you can very often spot the classically trained violinist by noticing his raised elbow, a habit that naturally leads to a flatter wrist. Obviously, what used to be valid someday may seem unorthodox today and vice versa. 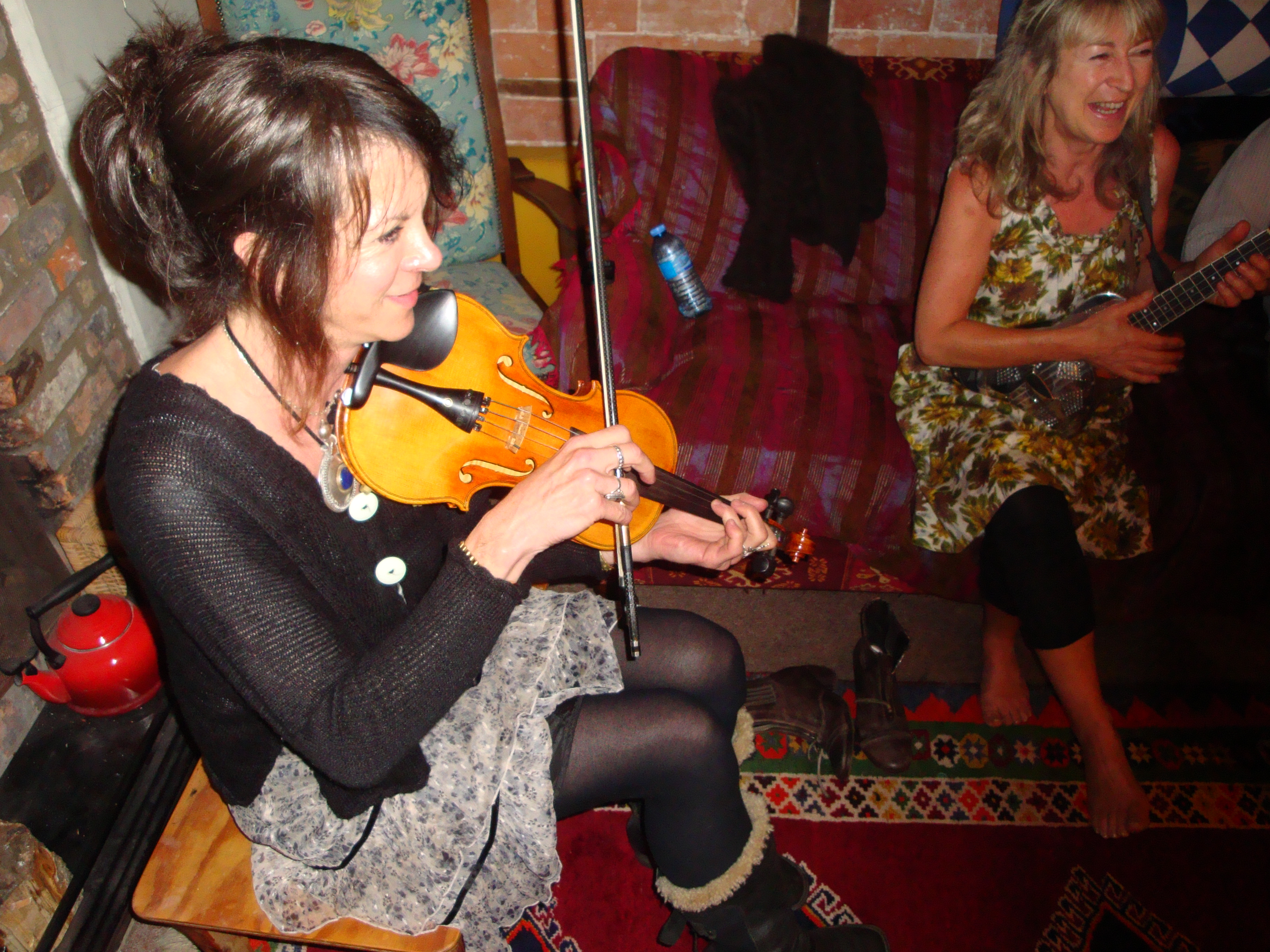 Bows used during the Baroque period were significantly different than modern bows. They were shorter and the distance between hair and stick was also larger. Yehudi Menuhin in his book ‘The Violin’ testifies that when he played with a baroque bow he noticed it ‘produced a natural accent’. He adds that with modern bows ‘one would have to apply pressure on the bow stick with the index finger’ to get that same accent. It is really worth mentioning the parallels in violin playing between the old time and Baroque traditions. As dancing is central in both traditions we come across common characteristics in style and instrument set up: holding the violin against the chest, flatter bridge, heavy ornamentation, open tunings, drones, accents, shorter bows, rare use of higher positions, more articulated playing, rare vibrato, melody repetition. In both traditions a distinct and steady pulse is supposed to invite people to dance.

The mosaic and diversity of bow holds bears witness to the ingenuity of aspiring musicians who are looking for ways to play their favorite music. And when they do succeed in that direction, that is not a proof of their technical skills, but rather of their deep musical understanding.

As with many other traditions around the world whose practitioners learn by interacting in their musical communities it appears that old time fiddlers share a bowing mentality that grows naturally through their need to play music. They internalize a way, or mentality, of playing that serves their honest musical needs. Bowing comes up more as a musical rather than a technical issue. In my experience, most old time fiddlers are not constantly aware of the different ways they are using their bow. I have asked old time fiddlers to describe their bowing patterns, but in most cases they had to think a lot before they could do that. I think this is the organic outcome of bypassing bowing as a ‘technical prerequisite’ during the learning process. It is an example of what we can call the ‘straight at the music approach’. In my opinion the ‘straight at the music approach’ may well constitute a beneficial practice even for classical musicians who very often suffer from dictated and over-analytical approaches in their training and interpretation. It may well bring them closer to the spirit of the music under study and help them discover a wealth of hidden musical potential. The devaluation of the ‘technical prerequisites’ concept may well be the key to accelerating progress. We can see that same principle from the opposite angle: The reason that a classical violinist cannot simply cross into the bowing of an old time fiddler is not really technical. It is mental or musical if you like. Strictly speaking the average classical violinist is not missing the necessary technical skills to play old time music. What he/she is missing is the mentality of using the bow to produce dance music and that has less to do with the concept of technique, at least in the sense most people understand it. Matt Glaser in his book ‘Jazz violin’ mentions that Grappelli once told him ‘the bow must go up and down’. Glaser pointedly mentions that this is an indication of the total absence of artifice in Grapelli’s approach. I always liked statements like Grappelli’s that intend to simplify things. In my eyes old-time fiddle bowing -and I suspect bowing in general- is all about thinking in 3 dimensions. Moving randomly in 3D is my favorite way of visualizing bowing. The 3D visualization brings us closer to the world of rhythm and is probably how we can impress the 3D motion of a dancer on our instruments. It is a liberating conceptualization that can unlock our right hand potential. Thinking in circles is another way of seeing it. Rayna Gellert (Fiddler Magazine, Summer 2003 issue,) discussing bowing mentions that when she is teaching she encourages people to ‘think little circles. Just keep that image in your head and don’t think too hard about it. Just have that image with you’. Thinking in 3D is especially useful in old-time music due to the percussive and rhythmic nature of the music. It helps in bringing out the percussive nature of old time music more effectively. Fiddle sticks and modern chopping are two examples of attempts in the history of fiddling to turn the fiddle into a rhythm machine. Adding that third dimension into our minds and hands will improve the mechanics of our playing. In his instructional tape Bruce Molsky is very clear on that. When he is discussing the tune Saddle up the Grey he talks about playing the low open G like a drum beat: ‘Boom! You have to practice getting your bow so that you are not pulling it smooth. You want to get a little snap into those things and make them sound like drum beats’.
If you found this post helpful and inspiring, the smallest contribution will encourage the author to continue writing and sharing his ideas. Thank you!