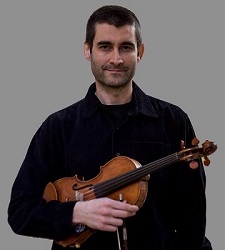 Violinist and banjo player, Stergios grew up playing classical music but eventually changed direction towards bluegrass and jazz music. He was also introduced to old-time fiddling by Lucas Paisley, a fiddler from North Carolina, whose mentality and musicianship led Stergios to delve into the archaic and ritual beauty of old-time fiddling.

Being a bluegrass fan from an early age he has been playing the 5-string banjo for many years. He was a founding member of the Salty Dog, the first known bluegrass band to be formed in Greece. Salty Dog performed around Greece in the late 1990’s introducing bluegrass music to wider audiences. Today he is playing fiddle and banjo in the Train 45 bluegrass band, the descendant of Salty Dog, still the only known group to play original bluegrass music in Greece.

Stergios has studied music education and he teaches fiddle, theory and improvisation.